To share your memory on the wall of Lope Alejandro, sign in using one of the following options:

It is with deep sadness that the family of Lope Alejandro announce his passing on Saturday, May 15th at the age of 87. Lope will be lovingly remembered by his wife of 49 years, El... Read More
Lope Alejandro
September 25, 1933 – May 15, 2021

It is with deep sadness that the family of Lope Alejandro announce his passing on Saturday, May 15th at the age of 87. Lope will be lovingly remembered by his wife of 49 years, Elisa and the entire Rualo family including Tatay Teofilo, Nanay Juliana, Domingo Rualo and family, Luz Monillas and family, Ramon Rualo and family, Anita and family. Lope’s children Rannie (Rina), Celina (Emil), Butch (Estela), Allan, Alona, and Llora (Warren). To carry on his legacy are his grandchildren Jan Rannel, Inna, Aaron, Aira, Jenica, Nathaniel, Arniel, Angelo, Josh, Aleijauna, Abrielle and Llorne. Including his great grandchildren Lucas, Domenia, and Mia.

Lope Alejandro was born September 25th, 1933 in Angono, Rizal. He was the middle child of three and was predeceased by his infant sister, mother Severa, father Moises and brother Dominciano.

On October 8th, 1971, Lope wed Elisa and together over many years, worked very hard to sponsor family members to Canada both on the Rualo and Alejandro sides. These two wonderful people were instrumental in helping family start new lives in Canada and those family members have themselves, gone on to start families of their own and have become established, hard working Canadians.

Lope’s earlier career was as a police officer in Rizal, Philippines working his way up to the rank of a highly respected Sargent. When he immigrated to Canada in 1971, he was not able to continue his career as police officer. Instead, he drove forklift for Old Dutch Foods and then moved on to work as a dedicated carman at the Canadian Pacific Railway for over 25 years.

Lope was well known as having a hearty appetite, a fan of the TV show Columbo, being a great poker player and most of all extremely generous in helping family and friends. All those who have had Lope in their lives are forever privileged and blessed.

Lamay was held on Wednesday, May 19th at Mosaic Funeral Home. Funeral mass was officiated by Father Sam Argenziano at Holy Rosary Church on Thursday, May 20th. The service was live-streamed and can still be viewed on YouTube.

To send flowers to the family or plant a tree in memory of Lope Alejandro, please visit our Heartfelt Sympathies Store.

We encourage you to share your most beloved memories of Lope here, so that the family and other loved ones can always see it. You can upload cherished photographs, or share your favorite stories, and can even comment on those shared by others. 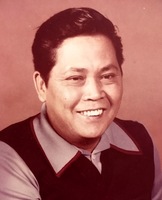