To share your memory on the wall of Mario Duay, sign in using one of the following options:

On the early morning hours of Thursday, May 6th, 2021, Mario Duay unexpectedly left us after suffering a massive heart attack during his sleep. Mario was 71.

On the early morning hours of Thursday, May 6th, 2021, Mario Duay unexpectedly left us after suffering a massive heart attack during his sleep. Mario was 71.

Mario was a loving family man who lived well and loved abundantly.

Mario was predeceased by his father Anastacio and mother Barbara. He will be lovingly remembered by his wife Zenaida (Zeny) and daughter Marizen, his only living sibling Eddie from Guam, his brother-in-law Eduardo Cruz (Aida) from the USA, his brother-in-law Alberto Cruz from Hongkong, his sister-in-law Luisa Pagsuyuin (Jaime) from Winnipeg, his sister-in-law Cris Talens (Ike) from BC, as well as his many relatives from Canada, USA, Philippines, Australia, and Great Britain.

Mario was born in Manila, Philippines on February 17th, 1950, and was the sixth of the seventh children. He studied at the Aurora Quezon Elementary School, Araullo High School and Mapua Institute of Technology and worked at the Philippine Long Distance and Telephone Company, and at the National Cash Register in the Philippines. He came and immigrated to Canada with his wife Zeny in 1981. He took several courses at the Red River College and worked at the CCL Labels and at the Labels Unlimited in Winnipeg until his retirement in 2011.

He was a loving and thoughtful husband to Zeny, and a dedicated father to Marizen. He was a hard worker and a good provider for the family. He had always made sure to put a smile on their faces with his antics, good humour and practical jokes. He loved his current dog Mocha and treated her and all his dogs that have gone before him (Kelly, Nognog, and Brandy) like members of his own family, and he made sure that all his dogs were by his side as he did his gardening. He worked tirelessly in his garden during summers, and was very passionate about his rose garden and his lawn. Mario loved to play tennis and he passed that knowledge to his daughter Marizen. He taught her how to be strong, and always made sure she was safe. He loved listening to his 60s and 70s music, Philippine as well as Spanish songs, and had a natural talent in cooking Philippine cuisines. After his retirement, Mario with his wife Zeny travelled extensively and vacationed in Europe and Asia.

Mario was an accomplished athlete, having won several tennis championships held by the Philippine Tennis Association of Manitoba. He loved to play chess with his chess buddies as well as with the online chess. He continued to be physically active even after his retirement and had memberships at the Wellness Institute in Winnipeg. Mario was known by everyone to be the funniest person ever. He would walk into a room and start cracking up jokes at friends and family gatherings. He showed us to live life to the fullest and to always laugh.

Zeny and Marizen would like to say special thanks to their many relatives from the Duay, Cruz, and Pagsuyuin families, their extended families from the Pagsuyuin, Lontajo, Urrutia, Dimawala and Macalino families, their close friends from the Macainan, Dela Cruz, Landicho, Vivar-Pamandanan, and Fernando families, Zeny’s close friends from the Comia, Brodick and Villaflor families, also to Mario’s nieces Arlene D., Melissa G., Mhel R., Mannix M. and Susan DC., Mario’s cousin Janet V.. Zeny’s cousin Celia S., Marizen’s boyfriend Daniel Vivar and his family, her best friends Sonya Gill and Matthew McDonald, also to all of Zeny’s best friends from the Special Science Class ’68 from Torres High School, Mario’s best friends Bon and Marilyn Soliven, Allan and Eneth Gomez, Romy Vallejos and George Pinlac, as well as all his tennis friends and buddies from the Philippine Tennis Association of Manitoba. his best friends from high school, Esther N .C., Lilian R., Lourdes G., Violeta S., Brenda L., Roberto O., Ric F., Alfonso L., and to all of his friends and former classmates at the Araullo High School Batch ’68, his best buddies from college Al M, Tessie and Noel L., and Fr. Sarce from St Edwards Catholic Church, for helping us during this difficult time.

Mass of the Resurrection will be held privately on Tuesday, May 25th 10:00am at St. Edwards Catholic Church 836 Arlington St., Winnipeg Manitoba, followed by the Interment at Glen Lawn Memorial Gardens Winnipeg Manitoba.

To send flowers to the family or plant a tree in memory of Mario Duay, please visit our Heartfelt Sympathies Store.

We encourage you to share your most beloved memories of Mario here, so that the family and other loved ones can always see it. You can upload cherished photographs, or share your favorite stories, and can even comment on those shared by others. 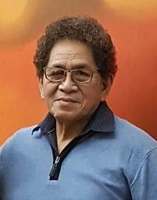